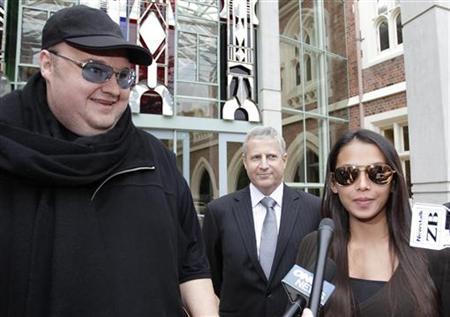 Megaupload founder Kim Dotcom (L) stands next to his wife Mona as he talks to members of the media after he left the High Court in Auckland February 29, 2012.
Credit: Reuters/Simon Watts,br />
WELLINGTON | Thu Aug 16, 2012 2:39am EDT

(Reuters) – U.S. federal authorities wanting to extradite Kim Dotcom, the founder of the Megaupload online file-sharing site, must show evidence to back up charges of internet piracy and copyright breaches, a New Zealand court ruled on Thursday.

The Federal Bureau of Investigation (FBI) accuses the flamboyant Dotcom of leading a group that netted $175 million since 2005 by copying and distributing music, movies and other copyrighted content without authorization.

The raid and evidence seizure has already been ruled illegal and the latest decision confirms that Dotcom should be allowed to see the evidence on which the extradition hearing will be based.

“Without access to materials relevant to the extradition hearing phase, the person sought will be significantly constrained in his or her ability to participate in the hearing,” Justice Helen Winkelmann said in a written judgment.

She said that would give the United States a significant advantage over Dotcom at next March’s extradition hearing.

Winkelmann also ruled that the legal document asking for Dotcom’s extradition did not comply with the law.

The judge said the extradition court hearing would be more modest than a formal criminal trial, but the evidence needed to be tested and the defense able to present its own evidence, test the prosecution’s claims and to examine witnesses.

The New Zealand courts have already ruled that evidence gathered in the January raid and sent to the United States was seized illegally and should be returned to New Zealand.

This site may contain copyrighted material the use of which has not always been specifically authorized by the copyright owner. We are making such material available in an effort to advance understanding of environmental, political, human rights, economic, democracy, scientific, and social justice issues, etc. we believe this constitutes a ‘fair use’ of any such copyrighted material as provided for in section 107 of the US Copyright Law.

In accordance with Title 17 U.S.C. Section 107, the material on this site is distributed without profit to those who have expressed a prior interest in receiving the included information for research and educational purposes. For more information go to:
http://www.law.cornell.edu/uscode/17/107.shtml

If you wish to use copyrighted material from this site for purposes of your own that go beyond ‘fair use’, you must obtain permission from the copyright owner.

The information on this site does not constitute legal, financial, technical or any other type of advice.

Any views expressed here-in are not necessarily those held by ChrisInMaryville.net.

Signup to get notified each morning of the new articles that have been published for free! Privacy is always respected and your interest is appreciated.